There is a story in Christian tradition from the book of Matthew, of the events that happened after the three wise men visited the baby Jesus and gave him gifts of gold, frankincense, and myrrh. The story goes like this (Matthew 2, 13-33):

When they had departed, behold, the angel of the Lord appeared to Joseph in a dream and said, “Rise, take the child and his mother, flee to Egypt, and stay there until I tell you. Herod is going to search for the child to destroy him.”

Joseph rose and took the child and his mother by night and departed for Egypt.
He stayed there until the death of Herod, that what the Lord had said through the prophet might be fulfilled, “Out of Egypt I called my son.”

When Herod realized that he had been deceived by the magi, he became furious. He ordered the massacre of all the boys in Bethlehem and its vicinity two years old and under, in accordance with the time he had ascertained from the magi.
Then was fulfilled what had been said through Jeremiah the prophet:

“A voice was heard in Ramah,
sobbing and loud lamentation;
Rachel weeping for her children,
and she would not be consoled,
since they were no more.”

When Herod had died, behold, the angel of the Lord appeared in a dream to Joseph in Egypt and said, “Rise, take the child and his mother and go to the land of Israel, for those who sought the child’s life are dead.”

He rose, took the child and his mother, and went to the land of Israel.

But when he heard that Archelaus was ruling over Judea in place of his father Herod, he was afraid to go back there. And because he had been warned in a dream, he departed for the region of Galilee.

He went and dwelt in a town called Nazareth, so that what had been spoken through the prophets might be fulfilled, “He shall be called a Nazorean.”

Fellow Christians, our Savior, the Son of God, was himself a refugee. When his young life was threatened, his mother and father fled with him to Egypt, until it was safe for them to return.

I wonder what Jesus, whose life was saved at that time, would say about the United States closing it’s doors to refugees from Syria? I’m pretty sure he already gave us a clue when he taught us in Matthew 25:35, “For I was hungry and you gave me food, I was thirsty and you gave me drink, a stranger and you welcomed me.”

We, the wealthiest country on the planet, have just forsaken those most vulnerable and needy: children, women, and men fleeing violence in their homeland. For them, it is run or die. And for us to sit in our comfort and our safety and refuse them refuge, makes us complicit in the atrocity. It is inhumane and callous. We have room for them. We’ll make room. It is our moral obligation to do so. Otherwise, we have their blood on our hands. 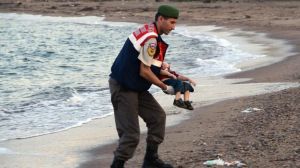 View all posts by treeinthebreeze